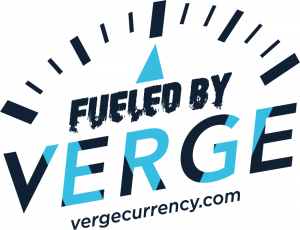 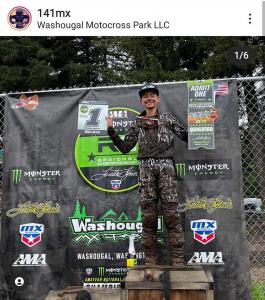 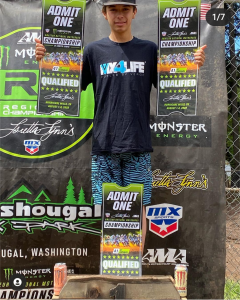 Danny Robertson and Jayden Riley, both from Alberta, Canada, are heading to the AMA Amateur National Motocross Championship, August 1-6, 2022

To have such high level Amateur athletes bringing awareness to a high level Digital Currency in $XVG is a great synergy. It brings the future of motocross together with the future of digital currency”

CALGARY, ALBERTA, CANADA, May 31, 2022 /EINPresswire.com/ — Fueled by Verge (FbV), a Foundation committed to the adoption of digital currency through spreading awareness & educating on blockchain technology and Verge Currency, through worldwide athletes, is proud to congratulate 2 of its Motocross Team athletes, Danny Robertson and Jayden Riley, as they have qualified for the Monster Energy AMA Amateur National Motocross Championship at the Loretta Lynn Ranch – Hurricane Mills, TN
August 1, 2022 – August 6, 2022

Both Danny and Riley qualified on May 29, 2022 through the Loretta Lynn NW Regional Qualifier at Washougal MX Park in Washington. Both riders had to travel to the qualifier on 2 separate occasions, where they had to finish at the top of their class both times. With heavy rain coming down on the 2nd qualifier this made the track extremely muddy, and in turn, made racing an extreme challenge for the riders. Both riders endured a weekend of challenges, but managed to finish at the top of their classes. Danny Robertson won the Regional Championship for the 10-12 85cc Class and received his “Admit One” ticket, and Jayden Riley received 3 “Admit One” tickets for the Mini Senior 1 (qualified 4th), Mini Senior 2 (qualified 2nd), and Supermini 1 (qualified 4th).

Danny and Riley, like most dedicated motocross athletes at this level, have been trying to qualify for the National Championship for many years. These 2 riders travel to events and competitions all over Canada and the USA. They currently sit at the top of their classes in Canada, for Amateur Motocross.

Having these 2 athletes as part of the Vergecurrency and Fueled by Verge Motocross Team is special for many reasons. They are the first 2 motocross athletes, in the history of the sport, to be representing a Digital Currency (cryptocurrency) at the Monster Energy AMA Amateur National Motocross Championship. Both Danny and Riley assist in bringing awareness to decentralized, open source, and community driven digital currency “Verge Currency, referred to by ticker $XVG. With both athletes branding their bikes and gear with Fueled by Verge, this allows them to welcome questions from their peers and community about $XVG. Both athletes are equipped with the answers that will bring the next generation of currency to users worldwide. Fueled by Verge is a not for profit Foundation, and through partners, assists athletes to travel to their respective competitions.

Derek Robertson, Co-Founder of Fueled by Verge comments “These 2 athletes have dedicated many years of their lives to get to this point. To have such high level Amateur athletes bringing awareness to a high level Digital Currency in $XVG is a great synergy. It brings the future of motocross together with the future of digital currency transactions. I am extremely proud of Danny and Jayden, for the dedication, commitment, and responsibility they show on and off the track”

The Monster Energy AMA Amateur National Motocross Championship, formerly the Loretta Lynn’s Amateur Championship, is held annually on Loretta Lynn’s family ranch in Hurricane Mills, Tennessee. It is known as the world’s largest amateur motocross race. It is the final stop for amateurs before they join the professional ranks.

Suggested in the early 1980s by race promoter Dave Coombs as a national amateur race held away from the contestants “Home Ground”, the first race was held in 1982. Loretta and her husband embraced the idea and today it’s the premier race of the amateur Motocross world. The track is constructed annually at their 6,000 acres horse ranch and has room for 300 camp sites. It is an ideal spot to hold a family oriented Motocross racing event.

Contestants must qualify through a series of events organized specifically for competing in one of the Amateur National Championship’s 37 racing classes. Only the best 42 riders in each class get an invitation to compete. By design the six-day event is held the first week of August so that winners can try their hand at one of the 3 or 4 remaining events of the AMA outdoor Motocross season.

The list of winners reads like the who’s who of American motocross talent since the mid 1990s. Ricky Carmichael went pro in 1996 weeks after winning his final Loretta’s title. James Stewart Jr. won seven amateur titles from 1998-01. Mike Alessi was the 2004 star. Ryan Villopoto won at Loretta’s and turned pro in 2005. Ryan Dungey (2006), Eli Tomac, Jason Anderson, Cooper Webb and Adam Cianciarulo were all Loretta’s champions. Past Loretta Lynn’s champions include Jeremy McGrath, Travis Pastrana and Kevin Windham. One rider every year based on results and potential is voted the winner of the Nicky Hayden Award in motocross for the rider with the most potential.