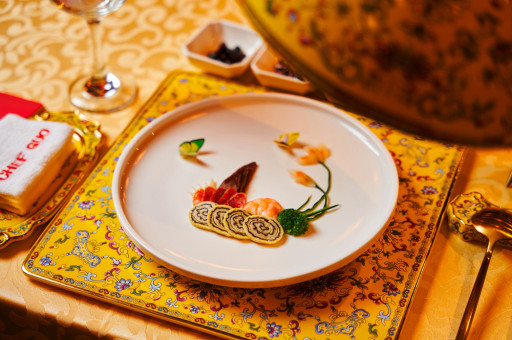 On a bustling Manhattan midtown street, a small plaque with bronze rim and lettering donned on polished, white marbled tiled walls. Unbeknownst to passersby, hidden behind an obscure black door, is a beautiful Chinese restaurant run by Chinese Master Chef Guo Wenjun, an eighth-generation disciple in the sacred lineage of Chinese royal chefs.

Upon entering the restaurant, customers are greeted by five stone horse pillars on their right, each representing a mythological being symbolizing wealth, status, and nobility.

Like the feet of the statue of St. Peter in the Vatican, customers are often seen touching the head of these pillars for good fortune. The beings, each representing a cardinal point, are the azure dragon, the white tiger, the vermillion bird, and the black tortoise. The Pixiu, the fifth being that shares some aesthetic similarities to a lion, is at the center of the pillars.

Chef Guo, who became a disciple of the royal chef Ding Guangzhou at 14, is now the eighth-generation disciple in the ancient lineage of royal chefs. This type of Chinese cuisine, also known as an imperial banquet, was usually enjoyed by Chinese royalties in the past. But what Chef Guo has created is an extension of that, and something entirely independent. He has coined his creation the Healthy Royal Cuisine Culinary System, which is also officially recognized in China as its own cuisine.

With Chef Guo's decision to bring his restaurant to New York, he has allowed this prominent culinary artistry — reserved sometimes only for important celebrations and festivities of royalties — to be enjoyed by anyone looking to elevate their selection of holiday season eatery.

"Chef Guo is easily my first choice this holiday season," says James Chang, a young professional from New York who has eaten at Chef Guo. "The overall vibe of this place, the attention to detail, the flavors…it is safe to say Chef Guo is a game-changer for helping Americans from far and wide to understand the full potential of Chinese cuisine. This is the real deal."

Chef Guo also has had the honor of cooking for numerous prominent Chinese leaders on occasion, and world leaders at the APEC Summit Dinner held in China in 2014, which was very well received by all those in attendance.

The high-end ingredients used by Chef Guo are sourced from around the world, natural, and, most importantly, healthy. The 19-course meal, which includes three types of tea, is a culmination of over 40 years of the chef's experience and essence, fusing with the modern knowledge of nutrition.

"The raw materials adopted by us are the most natural, best in quality, and precious food ingredients screened strictly from all over the world," said Chef Guo. "Every dish you eat here is carefully prepared in strict accordance with the requirements of various indicators of the human body. While you enjoy the food, you can also at the same time strengthen your body."